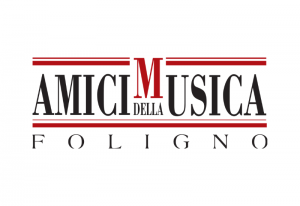 The Associazione Amici della Musica di Foligno is a non-profit, musical association born in 1981 in Foligno, an Italian town in the Central Italian region called Umbria. It is run by a governing board of nine members whose current president is Giorgio Battisti together with the artistic director M° Marco Scolastra. Its headquarter is in a prestigious 17th century palace, Palazzo Candiotti, just in the historical heart of town. Amici della Musica proposes every year an important Concert Season, from January to December, composed of about 30 concerts, opera recitals, conferences, masterclasses and other activities also dedicated to students and schools, aimed to spread in the local community the knowledge of classical, contemporary and other kind of art music. In its yearly progranme also takes an important part the building up of new musical productions in collaboration with other Italian (Accademia di Santa Cecilia, Teatro San Carlo, Filarmonica Romana), European and Overseas theaters, festivals and musical institutions. The Seasons also host premieres of contemporary composers and winners of the major international music competions. The Association receives public funding by the State, and by regional and local authorities. Many of the greatest musicians, orchestras and opera singers of the world have taken part in the Association “Concert Seasons” making its activity wellknown and appreciate on the Italian stage.