The Silenzio in sala a tempo di Musica project stems from the dialogue between the Comitato AMUR and the photographer Daniele Ratti and involves all of the Committee entities, that represent the most important institutions operating in classical music in Italy.
Music and photography met together with the aim of supporting musicians in the context of uncertainty due to the pandemic situation and recreating a 20/21 season behind closed doors but brought outside through images and sounds.
14 concerts, 14 theaters, 14 shots were the protagonists of Silenzio in Sala a Tempo di Musica and became the content of targeted communication and promotion actions in support of artists and the cultural world.

“How do you photograph music?
Imagine a static, immobile theater; imagine the center of the scene, a single light that illuminates the musicians and their instruments; imagine that they start playing for a certain period of time.
Now, in front of them – facing the audience – there is a camera and a photographer, motionless for the entire time of the performance; only one photograph is taken by the steady camera.
The result: a motionless theater on one side and moving figures on the other. In this motionless moment, music lives.” – Daniele Ratti

The Season has been broadcast every Sunday at 6pm from January 1st 2021 to April 4th 2021 on our website and YouTube channel.

The Silenzio in sala a tempo di Musica photo exhibition stems from the desire to give the public the testimony of the first online National Concert Season of the Comitato AMUR, realized thanks to the extraordinary ability of the cultural world to react in such a difficult period like the closure of theaters. The shots are exhibited for the very first time in via Dante in Milan for the entire month of July 2021: 14 exciting long exposure black and white photographs of nationally and internationally renowned theaters and artists and 200 portraits ofcultural sector operators, work of the photographer Daniele Ratti.

The exhibition is supported by

It is part of the Municipality of Milan’s cultural program 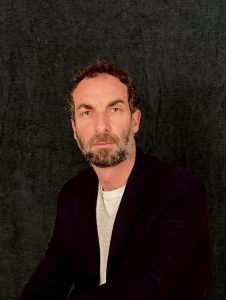 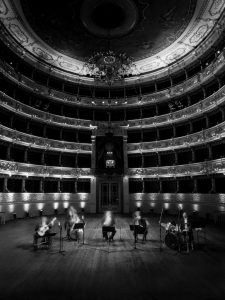 Born in Milan in 1974, he lives and works in Turin.
After graduating in Architecture at the Polytechnic of Turin, he has dedicated himself to professional photography since 2000. The first solo show dates back to 2004 and since then his artistic career has been flanked by other curatorial activities, among which the artistic direction of “Paratissima”, the exhibition that has been held every year in Turin since 2006.
Some works are currently in the permanent collections of the PAN of
Naples, the Bartoli Felter Foundation of Cagliari and numerous private collections. Since 2013 he has undertaken a project that has led him to the former Italian colonies in Africa and overseas.
There are many collaborations that have been born since 2015 with some editorial publications, INTERNAZIONALE photography festival such as CORTONAONTHEMOVE. Among the last two exhibitions: one curated by Arianna Rinaldo – “Next Stop” – and the other at the Gallerie d’Italia Museums of the Italian bank Intesa Sanpaolo, curated by Mario Calabresi.